Wandering the byways of the virtual world Second Life one day, I came across an extraordinary vision of reality in the Japanese fishing village Hosoi Yu Ch’un and the farming village Hosoi Lung Ch’un built by Amiryu Hosoi at Hosoi Ichiba on Virgin Island.

Hosoi Ichiba is an old-style Asian market with luscious oriental gardens surrounding a peace garden for meditation and quiet reflection. It’s a wonderful place to sit, relax and contemplate. (More about the market in a companion post here.)

Freshly caught fish drying on a rack in the village

On the day I happened to visit the quaint fishing village there was a lovely Cherry Blossom Festival and Relay for Life public service event for the American Cancer Society. 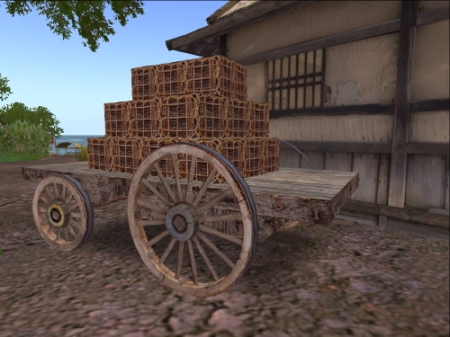 Fish traps on a cart in the village

Can you hear the water dripping as this cart’s cargo dries? 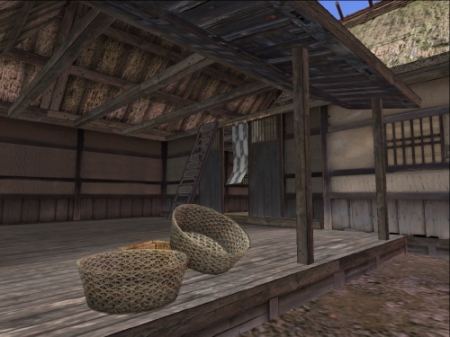 Baskets drying on a porch in the village

The hot Sun dries and cleanses these baskets, readying them for another day’s catch.

Boat beached next to a house in the village

The breeze waves the cloth hanging as a kind of front door of this typical village house.

Swaying to and fro as you lope across these sturdy knotted planks. 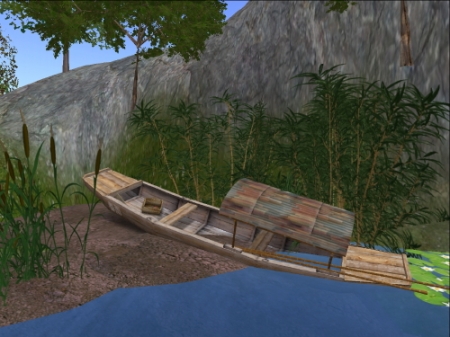 Amiryu Hosoi’s creations have been called “the most beautiful sims in Second Life.” For me they certainly are among a tiny handful of the very best. 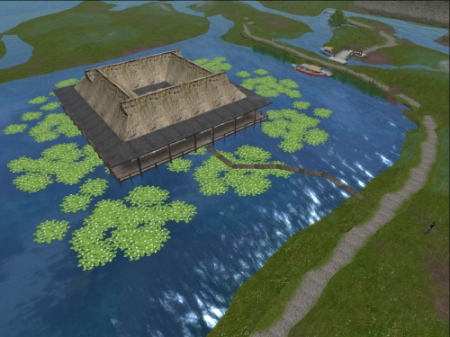 There are hidden bounties behind the village’s tranquil facade. It oozes bucolic charm and is surrounded by lush vegetation and the beautiful blue-green waters of the Second Life ocean. Those are Asian water lilies and lotus flowers floating atop the water.

Every day at Hosoi Yu Ch’un new catches of fresh fish and a variety of crustaceans can be seen tossing helplessly in baskets and crates before being taken to market and sliced into succulent cuts of sashimi.

Houses on water with Asian water lilies and lotus flowers

Sometimes the quietness of swaying ocean waves is transformed briefly when events bring many visitors to the Hosoi Ichiba market. For instance, the charming show staged in September 2008 by the Yoshiwara Oikya Geisha School, a training school for women. Such events commemorate the market’s heritage.

I’m hoping Amiryu Hosoi will offer a sea-produce fair on Virgin Island sometime soon. I can just imagine stands offering thousands of cuts of fresh sashimi and other local products, as well as the usual festival food. I’m pretty sure I would pass up the tentacles and endangered sardines, but others might love them. 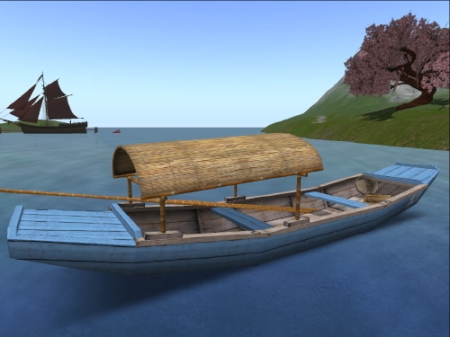 Tourists from all over Second Life would have a wonderful opportunity to go home with lovely souvenirs from Hosoi Ichiba on Virgin Island. 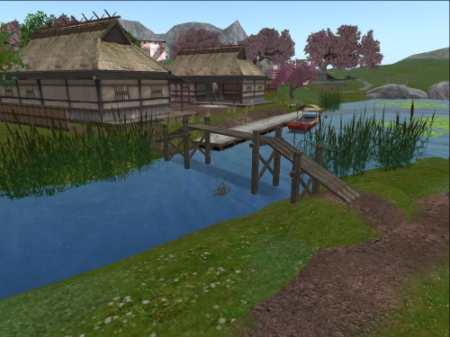 Houses with a footbridge across a stream

In the real world, a sleepy fishing village in Japan — previously famous only for its mackerel — gained renown in November 2008 when Barack Obama was elected president of the United States. The Japanese fishing village’s name is Obama.

In California, according to the U.S. National Park Service, Terminal Island — also known as East San Pedro — was acknowledged in the years before World War II as a typical Japanese fishing village. Until February 1942, a community of about 3,000 Japanese Americans lived and worked in the area of Terminal Way and Tuna, Cannery, Albacore, and Pilchard streets. According to the park service, development of the fishing industry in Southern California resulted from their pioneering efforts in gathering, drying and canning abalone at White Point, and fishing for albacore off San Pedro. 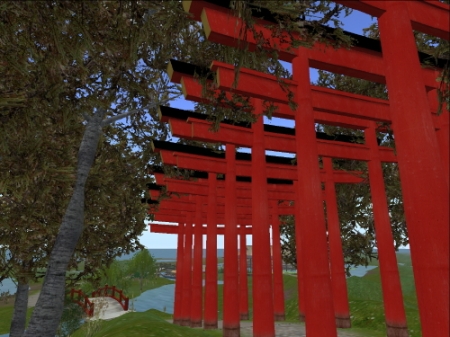 The red gates are torii commonly found at the entrance to a Shinto shrine. Sometimes they are found at Buddhist temples. A torii has two upright supports and two crossbars on the top, and usually is painted Vermilion red. Torii mark the boundary between the sacred shrine environment and the normal world. Some shrines have many torii, as below. Sometimes a person who has been successful in business donates a torii in gratitude.

See my second post about Hosoi Ichiba on Virgin Island.

Here is a link to a Flickr set of my photos of Hosoi Ichiba.

Here is the Hosoi Ichiba blog.

Here’s a machinima about the Little Yoshiwara Geishas at Hosoi Ichiba.

There’s a discussion of Shinto in Wikipedia.

Information about the Relay for Life charity.

This entry was posted on Saturday, November 8th, 2008 at 3:23 pm and is filed under culture, exploration, public life, Second Life, SecondLife, SL, society, travel, Uncategorized. You can follow any responses to this entry through the RSS 2.0 feed. You can leave a response, or trackback from your own site.